Cold and Flu Prevention During the Seasons, Part 2: Foods and Herbs

When we get a cold or flu, we experience a host of symptoms such as headache, chills and body aches, fever, cough, and sinus congestion. While these symptoms may make us feel terrible in the short term, they are nevertheless a sign that our immune systems are working tirelessly to fight off the infection, whether it be viral or bacterial in nature. Here we list some tried and true at-home remedies that can help prevent and assist in the recovery of common colds and keep our immune systems in top shape!

Not only is chicken soup good for the soul, but it also turns out to be a great remedy for alleviating the symptoms of the common cold! Since ancient times, many cultures have adopted chicken soup to treat respiratory tract infections, and recent studies seem to back up claims of chicken soup's wonderful healing powers. A 2000 study published in CHEST suggested that chicken soup may help to mitigate upper respiratory tract infection and inflammatory symptoms by reducing the migration of white blood cells - cells thought to increase inflammatory cold symptoms such as stuffy nose - to the region. A 2012 study published in the American Journal of Therapeutics suggested that a compound found in chicken soup and chicken breast called carnosine could also help to inhibit inflammatory conditions associated with viral infections and prevent the development of the common cold. Moreover, a study published in the 1978 issue of CHEST compared the velocity of nasal mucous when participants drank cold water, hot water, or hot chicken soup; it was found that the chicken soup did a better job than plain hot water in encouraging the flow of nasal mucous and relieving sinus congestion. According to a 1998 Coping with Allergies and Asthma report, chicken soup also improves the function of the tiny hairlike cilia that line the nose, thus preventing contagions from entering through the nose.

Spicing up your food with spicy and pungent foods such as garlic, onion, ginger, thyme, rosemary, and sage can be very helpful during the early stages of a cold. This is also why chicken soup may be helpful for colds - because of the herbs, garlic, and onion that are often added to flavor the broth. From a Chinese medicine viewpoint, these spices and herbs help to disperse and eliminate unwanted pathogens and ward off colds.

Garlic is a multi-functional food staple, having anti-viral, anti-bacterial, and anti-fungal properties. In Clinical Nutrition (2012), researchers studied the effects of aged garlic extract supplementation and found that participants who took the supplement for 90 days experienced a significantly greater increase in the number of natural killer cells - immune cells that help fight infections and cancer - and a decrease in the duration and severity of colds and flus compared to the placebo group. Make sure to chop or crush your garlic in order to activate the bioactive part of garlic, which is allicin. Onions, leeks, green onions, and shallots are also part of the same Allium family of plants, so they also have a similar therapeutic effect as garlic!

Ginger tea with lemon and honey makes the perfect trifecta of immune boosting powerhouse foods that you can easily add to your routine when you're feeling under the weather or are fighting off a cold or flu. It is best to use ginger when you have Wind Cold symptoms such as itchy throat, chills, aches, no or low fever, runny nose with clear, thin mucous, headache, and aversion to cold. Ginger - with its anti-bacterial, anti-inflammatory, and anti-nausea function - helps to improve gut immunity by acting as a prebiotic and encouraging the growth of beneficial bacteria such as lactobacillus and bifidobacterium within the gut (Lu et al., 2017), which is essential for immune health. Honey has also been long known to have superb anti-microbial and anti-bacterial properties, but unlike antibiotic medicine, bacterial resistance has never been reported for honey. Besides being rich in vitamin C, lemons also deliver antimicrobial benefits and have been shown to have a strong effect against Candida Albicans (Oikey et al., 2015).

You can make a simple but potent ginger tea by thinly slicing about an inch (or more if you're daring!) of a ginger root, bringing 2 cups of water to a boil, and gently simmering the ginger for 15 minutes on a low flame. Add a dollop of honey and a squeeze of lemon, and you're all set! Drink up to 5 cups a day. If you want to be more courageous and need something stronger that will get rid of Wind Cold symptoms related the cold or flu, boil the ginger with a coarsely chopped green onion.

Baical Skullcap Root, also known as Huang Qin in Chinese, has been used for centuries in China to clear heat toxin and dry dampness from the Lung, Gallbladder, Stomach, and Large Intestine Channels. Recent research has shown that the flavonoid compounds in skullcap root exhibit strong antiviral, anticancer, and anti-inflammatory properties (Ji et al., 2015) and specifically can protect from and increase the survival rate in mice with acute lung injury caused by the H1N1 flu virus (Zhi et al., 2019; Ding et al., 2014). In Chinese medicine, we often use skullcap root to alleviate the heat-related symptoms of the cold or flu such as sinus inflammation, sore throat, yellow or green phlegm, and fever. We recommend that your practitioner prescribe this herb for you as needed. Most often, this particular herb is combined with other herbs in a formula, but it can also be bought as a supplement and taken on its own. 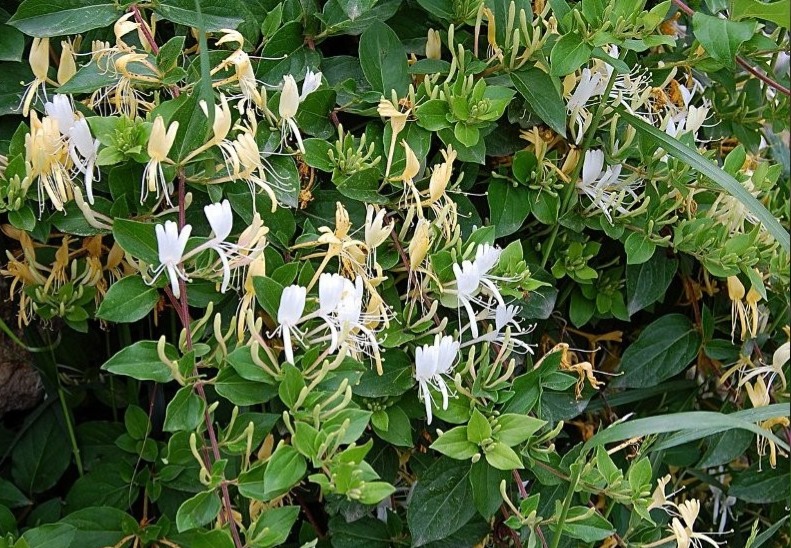 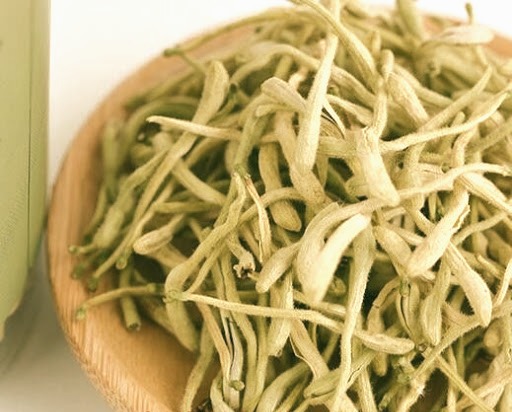 The delicate Japanese honeysuckle flowers are not only beautiful, but they are rich in chlorogenic acid, which has been shown to exert a gastroprotective effect via its natural antibiotic, antioxidant, and anti-inflammatory effects without disturbing the balance of bacterial flora in the body (Bang et al., 2019). Traditionally, this herb has been used to treat heat signs associated with the cold or flu such as sore throat and fever, but it is also commonly used to treat inflammatory and pus-related disorders such as boils and cystic acne. The herb has been shown to exert an antibiotic effect on a wide range of bacteria, including staphylococcus aureus, streptococcus B-hemolytic, E. coli, vibrio cholera, salmonella typhi, diplococcus pneumoniae, diplococcus meningitidis,pseudomonas aerurginosa, mycobacterium tuberculosis, and bacillus dysenteriae. Its traditional use for colds and flus has been substantiated in recent research, which shows that this powerful flower, particularly when paired with another Chinese herb known as Forsythia, or Lian Qiao, exerts an antiviral effect against the Influenza virus (Ding et al., 2017).

Dried Japanese honeysuckle flowers can be purchased online or from a Chinese supermarket or herb dispensary. You can easily make a tea by simmering two teaspoons of the dried herb in two cups of water for about 10 to 15 minutes. Drink up to three cups per day. You should not drink this tea if you do not have heat symptoms.

Steamed pears are an excellent traditional Chinese folk-remedy for those suffering from Lung Heat conditions with symptoms such as a chronic, dry cough, scanty phlegm, sore throat, and thirst. Pears are cooling in nature and help to moisten the Lungs, increase fluids, and dissolve stubborn, thick phlegm. The easiest way to steam a pear is to place it in a steaming basket and steam for about 50 minutes; wait for it to cool down before eating. You can eat one steamed pear everyday while you are sick. Traditionally, though, we will cut off the top 1/4 of the pear, carve a small pit in the center of the pear, stick some rock sugar (or other sweetener of your choice) with about 3 to 6 grams of ground Sichuan Fritillaria Bulb (can be purchased at a Chinese supermarket or Chinese herbal pharmacy) inside the pit, cover the pear again with the cut-off top, and steam for 50 minutes. A recipe can be found on Yang's Nourishing Kitchen website if you are interested in cooking the more traditional version of the steamed pear with Fritillaria Bulb.

When you are fighting a cold or a flu, the last thing you want to do is overload your digestive system with foods that are oily or greasy and difficult to digest. This prevents your body from expending all its energy towards healing. We suggest that patients stick with light, easy-to-digest meals such as rice porridge, soup, and rice with steamed vegetables while they are sick. Sugary, salty, fried, greasy foods, as well as dairy products, eggs, alcohol, caffeine, excess meat, and baked goods all engender more dampness and stagnation within the body and will make it more difficult for you and your lungs to recover.

As always, we recommend contacting your TCM practitioner for more specific herbal formulas and advice if you do, in fact, come down with a cold or flu. Our doctors at TCM Healing Center prescribe more comprehensive herbal formulas for our patients to help them recover from colds and flus, particularly if the cold or flu symptoms do not resolve after trying the more conservative at-home remedies. We wish all our a patients much health and wellness through the year!